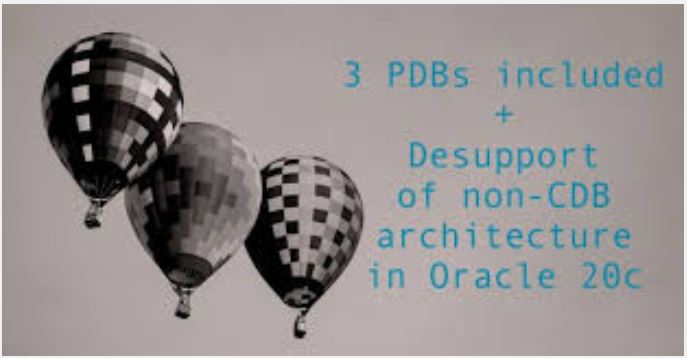 A part of his slide:

This isn’t clearly stated in the licensing documentation of 19c, so I wanted more proof.

Let’s start with the beginning: what is a Proxy PDB, why should you want it, and how do you install it? Oracle-base has a nice blogpost regarding this. In my own words: A Proxy DB is just a serving hatch. You think you’re talking to one database, but all your commands and data are actually transported to another PDB. This can be useful when you migrate the PDB (to the cloud), or when you don’t want or can’t change anything on the clients.

(The picture I used are from the site of Tim Hall).

By the way: When you feel more comfortable with a lazier explanation, you can watch this YouTube-video of Tim Hall about Proxy PDBs.

Below, you’ll find some tests I did to familiarize myself.

The Seed PDB doesn’t count, so there are two PDBS.

I’m setting the parameter MAX_PDBS to 2.

This parameter is counting user-created PDB’s, according to the documentation.

I played around and tested if it is fool proof, trying to set the parameter below the number of PDBs:

So the creation of an extra user-created PDB shouldn’t work either:

When a Proxy PDB isn’t considered a ‘user-created’ PDB – as the PDB$SEED – then I will be able to create this. It will be the ultimate proof that we are allowed to use the Proxy DB within the 3 free PDBs. After some preparation (referenced PDB in local undo mode, archivelog mode, referenced PDB in open read/write mode):

Is there an LMS-source I can use? The script they used before 19c (ReviewLite17.2.sql):

PROMPT If more than one PDB container is returned, then Multitenant Option is in use

In this script, there’s no distinction between Proxy PDB and regular ones. Unfortunately, I haven’t got the script LMS is using for the 19c version yet.

As a last resort (reluctant to do this), I finally asked LMS.

Is a Proxy DB and Application-Root Container considered a ‘user-created’ PDB in 19c and onward? With other words, are you allowed for example to have 3 ‘normal’ databases and 1 Proxy DB without having to buy a Multitenancy license?

Root container  (CDB$ROOT) and Proxy DB are not counted.

Root container is used only by the Oracle DB to administrates the PDBs.

The proxy DB is just a link to a physical PDB.

So the answer is YES.

The customer can use 1 CDB 1 Proxy and 3 PDBs without the need to buy Multitenant.

Quite clear about the Proxy PDB: It is NOT a user-created PDB!

The Application-Root container is likely to be the same as the definition of MAX_PDBs: application seed and application root clones.

At last, I got an answer for this tiny little question that bothered me sometimes.

Preparations for a Proxy PDB: https://blog.toadworld.com/2017/05/24/oracle-database-12cr2-new-feature-proxy-pdb