The bare minimum of licensing an ODA X7-2

The other day we had a discussion about the question if you can buy an Oracle Database Appliance X7-2 HA when you only have 1 socket license Oracle SE. The licensing rules can be interpreted different by some. Disregarding the question why you would buy an ODA HA if you only got one license by the way 😊.

But… you could imagine a situation where a customer has software, suitable to run on a OracleVM at the (virtualized) ODA, talking to a database on the same ODA, at the ODA-BASE. Then you are able to configure a high available and cost-effective (of licenses) architecture this way. But this must be done on a virtualized ODA.

Back to the question. Is 1 socket Oracle SE enough for a X7-2 HA consisting of 2 servers, with 2 sockets each. First of all, is Oracle SE supported? Yes it is, according to the documentation :

And there is a note, what can be interpreted in different ways, especially the last sentence:

You can provision Standard Edition and Standard Edition 2 RAC databases, but you must use Oracle VM virtualization on Oracle Database Appliance X7-2-HA and follow the single socket per server licensing restriction. The single socket restriction means that you can use a maximum of 18 cores per server, in multiples of two. You can use the remaining cores for applications.

The ODA-BASE can be seen as a VM, so this sentence was interpreted the following way:

You can license a “single socket” as long as you create an ODA_BASE of 18 cores (1 socket). At deployment, a database VM will be created (the ODA-BASE) with a size of 18 cores, which is exact the size of 1 processor equalizing 1 Standard Edition processor license. 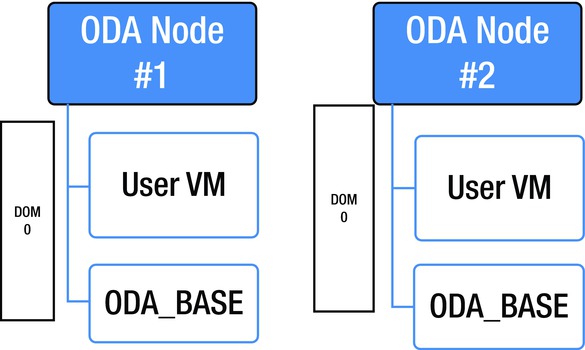 Following these thoughts, you will have to license 1 processor license… Never thought about it this way, but however an ODA-BASE is technically a VM indeed, it is not the VM the documentation meant. When creating an ODA-BASE you have no influence to assign these to one server, or even one socket. The 18 cores will be automatically split and devided over the two servers, occupying 4 sockets, as you can’t install ODA-BASE on just one server.

Looks like the bare minimum of licensing an Oracle Database Appliance X7-2 HA, are 2 Oracle SE2 processor licenses, ánd using some advantages of the ODA X7-2 by using the ODA-BASE. But… the absolutely bare minimum is when you don’t use the possibilities and don’t use the ODA-BASE at all, and install the database in an OracleVM. Assigning 1 core to this VM, and you only need 1 processor license of Oracle SE.

O.k. but is LMS feeling the same way? So we asked. Took a while, cause LMS has (understandable) no indepth knowledge of an ODA or ODA-BASE, but we got the answer:

I double checked the licensing slides for ODA and SE2.  Both sockets must be licensed. According to the slides all models except X6-2 S and X7-2 S require both sockets to be licensed for SE2.

You are correct about not having direct control over how ODA_BASE gets configured. It is possible to use OVM hard partitioning to run SE2 on one socket but they loose the advantages of running it in ODA_BASE

It’s possible to use failover at the X7-2 HA as long as you follow the Failover rules ( http://www.oracle.com/us/corporate/pricing/data-recovery-licensing-070587.pdf)